From
1909
To
1969
Categories
Principal Act
Location

The Act outlined the duties of the Protection Board, gave it the right to control Aboriginal reserves and to appoint staff. It also provided the foundation for the Board's policies of removing youths from Aboriginal stations and setting them to work.

The new legislation gave the Board the right to apprentice 'the child of any Aborigine, or the neglected child of any person apparently having an admixture of Aboriginal blood in his veins', so long as the child was between the ages of 14 and 21 years of age. The Aborigines Protection Act stated that the Board was to act in accordance with the Neglected Children and Juvenile Offenders Act 1905 and the Apprentices Act 1901, but the Board developed its own policies that were quite different to those applied to non-Aboriginal children and adults. 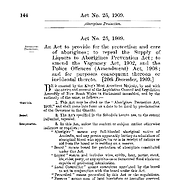 An Act to provide for the protection and care of aborigines [20th December, 1909.]
Send message to Find & Connect support service