Reid, along with Ivanhoe, Sargood Hall, Blackwood, Son of the Rock and Robertson, were leased by Redeemer Baptist School in 1986 then sold to the school in 1994. 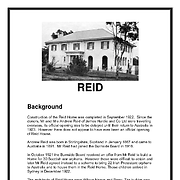