The Dr Dill Macky Memorial Home for Children, Auburn was licensed by the State Children's Relief Department until 1920 to care for up to 10 infants (children under the age of 7). The Home had previously been the King Edward VII Home but was renamed after the death of the founder of the Australian Protestant Orphan Society and the King Edward VII Home, Dr Dill Macky. William Dill Macky (1849-1913) was a firebrand Presbyterian Minister who taught at St Andrews' College at Sydney University, was attached to Sydney Scots Presbyterian Church, and toured New South Wales as an anti-Catholic preacher.

In 1921, the Dill Macky Memorial Home was granted 5 shillings for every orphan in its care by the State Government. This allowance was extended to a range of private institutions that cared for children. . 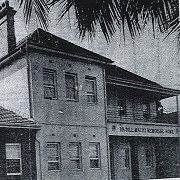