In early-mid 1986 the decision to close the Orphanage and Family Crisis Centre was made. The opportunity to continue the Family Crisis Centre was offered to the Missionaries of Charity but they declined. The building was left empty until 1989 when Kinross-Wolaroi School in Orange took over the building as a boarding house. It was known as Croagh Patrick House and was used until 1994. In 1995 Orange Community Training and Education Centre (OCTEC) took over Croagh Patrick House. Since 2003 it has been known as Croagh Patrick College and a major redevelopment of the site occurred between 2010 and 2012 to turn it into a community services and health training facility. 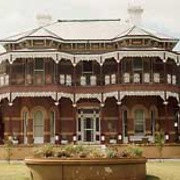