Charlton was run by the Anglican Home Mission Society, and the new home in Ashfield was a modernisation and streamlining of its activities. Charlton was intended to provide a home, care and assistance for older youths who had been through the Children's Courts, and were approaching, or at, working age.

Charlton Boys Home consisted of three buildings built at 16 Brunswick Parade Ashfield, on the former Milleewa boys home site. In the late 1970s the large homes devolved into smaller group homes so the Ashfield Home was closed and the buildings were renamed Robinson Home 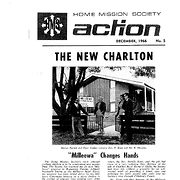